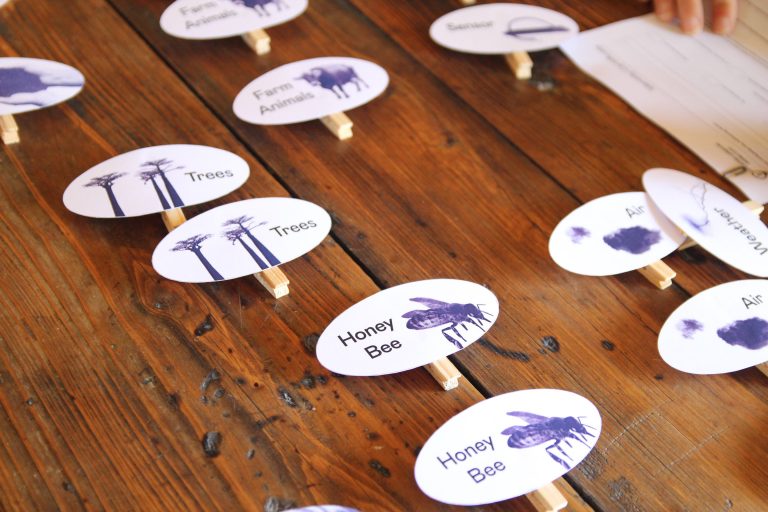 ‘Now London is a City Farm’ was the second of four workshops in the Algorithmic Food Justice series to explore and prototype new systems to serve the needs of humans and non-humans (such as seeds, soil and water).

In this workshop we played a game with various characters to imagine a more sustainable, inclusive and just future food system in the city. The format of the game is called Live Action Role Play (LARP). The game was created based on what we learned in the first workshop, and drawing on facts about current facts about food and environmental injustices.

The LARP was set  after a fictional event in 2020 known as “The Great Food Emergency” after which all of London is reformed as a city farm.

The aim of the game was to transform London from an extractive financial centre into a global city farm in which all of London’s available spaces and infrastructures are turned over to creating a thriving food commons for its biodiverse inhabitants. Our actions were informed by real-world events and (social/scientific/technical) possibilities as we tried to establish new decision-making systems and urban infrastructures.

In each assembly, participants took on a board role, representing a different committee. Committees included: Coordination, Health, Agriculture, Security, Culture, Justice, Resources and Waste management, Education, Energy, Infrastructure, and Liaison. (*A fork of the 2018 LARP ‘What will it be like when we build an island (on the blockchain)?’ by Ed Fornielis as part of the DAOWO series http://www.daowo.org/#what-will-it-be-like-when-we-buy-an-island-on-the-blockchain)

Participants were asked to join in a ritual: close your eyes, imagine your human character in one hand, your companion species in the other hand, rub your hands together till you feel the warmth, and clap.

Each assembly then discussed the items on the agenda, which were the same for both the EC1 and the London-wide assemblies. These were based on Nobel prize-winning economist Elinor Ostrom’s design principles for the commons:

There was then a liaison exchange between the local and city-wide assemblies. No suprises here, the city-wide assemblies were full of excuses, they were so slow-moving, “It’s remarkably like real life. You go over there [to the city-wide assembly] and they make you feel good. They ask you want you think and tell you that they care.” (Security). “They did say that we were way older than them, and we had a lot more time to practice our solutions” (Justice).

There were some great ideas around bacterial festivals, cross-species work placements, holidays for micro-organisms, piloting multispecies communications working groups, and resuing the body-scanners from the now defunct London airports to make sure no-one’s smuggling out pumpkins.

The discussion around the risk matrix were quite optimistic.

Feedback revolved around difficulties in juggling the voices and needs of the human and the companion species. Also in general, it was still often the humans dominating the conversations, but we did make some headway towards multispecies relations and protecting the food commons.

Basilia and Etracy from the Zimbabwean association made a fabulous lunch for us all.

Next steps: putting it all on the blockchain, of course….

We've been planning workshop number two with @furtherfield: a Live Action Role Play exploring the aftermath of the Great Food Emergency of 2035, when all of London has become a city farm! Monday Oct 28 10am @spitz_cityfarm. Growers and interested others get in touch for details.

We're busy planning our first workshop mapping multispecies actors, resources and relationships to find out: What does the city farm and community garden need to thrive in the future? Monday 30th September 2019 @spitz_cityfarm with @furtherfield